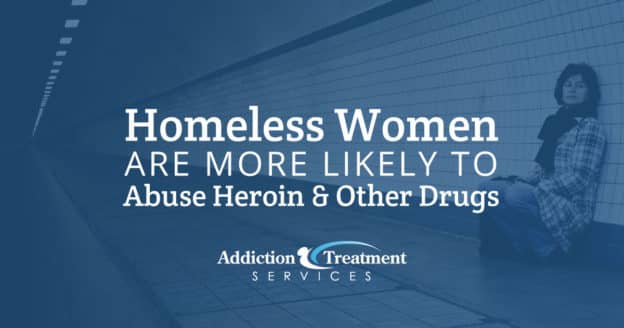 Although drug and alcohol abuse is on the rise nationally among several demographics, substance abuse among the homeless is still more prevalent than in the rest of the population.

Thirty-eight percent of homeless people were dependent on alcohol and 26 percent abused other drugs, according to estimates back in 2003 by the Substance Abuse and Mental Health Services Administration.

According to more recent data, only 10.1 percent of all Americans older than the age of 12 reported using illegal drugs within the previous month, the 2015 National Household Survey on Drug Use and Health (NSDUH) found.

It's well known that there is a strong correlation between addiction and homelessness. However, because homeless people often get ignored or overlooked by the health care system, actual stats are hard to find.

The most recent data available comes from Homeless Link, a U.K.-based charity that aims to provide help for the homeless. To determine what sort of help was needed, the group conducted a survey of 3,355 homeless people in 2015 to investigate the mental and physical health of this population.

The study found that:

Homeless Women at Even Greater Risk

The study also found that homeless women are more likely than men to abuse heroin and crack cocaine.

The results from the study indicate that there is a severe lack of health care for people living on the streets, at least in the U.K. – although the United States would appear to be in a similar predicament.

The Homeless Link report recommends focusing on providing mental health and preventative care to the homeless to reduce the substance abuse problem.

“The details revealed by this research may be surprising, but they illustrate how useful a health-needs audit can be in accurately assessing the needs of those experiencing homelessness,” Jacqui McCluskey, director of policy and communications at Homeless Link, told a local CBS affiliate in D.C. “This evidence is vital for local areas to ensure the most effective responses to people's needs are commissioned.”

Given that these statistics are already a few years old, the reality of the problem of addiction among the homeless may be even more severe than the stats indicate.

The Link Between Homelessness and Addiction

In some cases, drug or alcohol addiction is the cause of homelessness. In other cases, alcohol and drugs are abused after the participants became homeless, as a means of trying to cope with the situation.

People who suffer from mental illness often have difficulty keeping employment and maintaining relationships. As a result, they may end up on the streets. They commonly turn to drugs and alcohol as a way to cope with the stress and discomfort of living without adequate food or shelter, and as a way to self-medicate the symptoms of their mental illness.

Many non-homeless people with mental illness also use addictive substances to self-medicate, so those with mental health issues may already be addicted when they become homeless.

The Opioid Epidemic and Heroin

The number of people in the U.S. who are addicted to heroin, an opiate drug, has exploded in recent years. In 2014, an estimated 2.5 million Americans were addicted to either heroin or prescription opioid drugs, and in 2015, more than 30,000 deaths resulted from overdoses on those same drugs.

This alarming trend is due in large part to the widespread use of prescription painkillers. These legal opioid drugs are extremely addictive and should only be used for short-term, acute pain management. However, many people use them for too long and become addicted. Once their painkiller prescriptions run out, they turn to heroin as a cheaper and more readily available alternative.

When the chase for the next high leads to loss of job and home, many of these heroin addicts end up on the streets.

We Must Stop the Cycle of Addiction and Homelessness

One study found that overdose has surpassed HIV as the leading cause of death among the homeless population, with opioids alone being responsible for more than 80 percent of those deaths.

Since drug use often leads to homelessness, it's likely that as the drug problems in this country continue to grow, the homeless problem will also continue to grow. This would further increase the addiction problem. And it's why it's critical to break the cycle by getting homeless people the help they need.

In addition to traditional forms of support for the homeless, like food and housing, our society needs to also make sure these individuals also have access to addiction treatment and resources for managing mental illness.