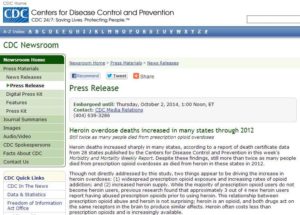 Overdose deaths from heroin abuse and prescription pain medication abuse (opioids) increased through much of the United States in 2012. In fact, The Centers for Disease Control and Prevention (CDC) reviewed the data from 28 states and found that twice as many people died from prescription opioid overdoses than died from heroin overdoses.

There are a couple of things that appear to be driving the increase of heroin overdoses. First, there is the widespread exposure to painkillers that can often find addicts winding up on heroin. Second, there seems to be an increase in heroin supply to meet this increasing demand. No all prescription opioid users become heroin users, but previous research showed that 3 out of 4 new heroin users abused painkillers before using heroin.

Heroin’s cheaper price and increasing availability have been contributing factors. Since heroin and prescription painkillers are in the same category of substance, users experience the similar effects from both drugs. Therefore, the relationship between the two drugs is not surprising.

CDC Director Tom Frienden, MD, MPH says that reducing inappropriate prescribing practices is an important part of the strategy targeting overdoses from both heroin and the medications. “Addressing prescription opioid abuse by changing prescribing is likely to prevent heroin use in the long term,” he said.

Researchers also believe it is important to help those who are addicted to heroin and painkillers with effective treatment services in conjunction with the preventative measures. While some may recommend opioid replacement therapy, we work with facilities that help people fully detox from heroin and other opiates, and incorporate long-term residential treatment.