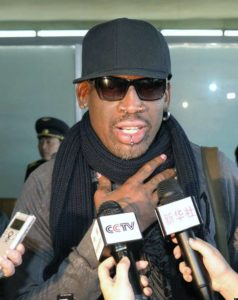 Former NBA star and reality TV regular Dennis Rodman, 52, recently checked himself into a rehabilitation program to deal with his ongoing problem with alcoholism. The treatment admission comes after his trip to North Korea and scrutiny for being extra friendly with Kim Jong Un.

Rodman blew up at a CNN reporter when questioned about an American being held captive in North Korea, then later apologized for his outburst and blamed it on his drinking problem.

According to People magazine, Rodman’s spokesperson Darren Prince said, “He is embarrassed, saddened and remorseful for the anger and hurt his words have caused.”

In addition to an earlier rehab stint back in 2008, Dennis Rodman appeared on a season of Celebrity Rehab with Dr. Drew, but he appeared non-compliant and denied having a problem. Apparently, he was there for the exposure and because it was a paying gig. So far three of his cast members that season have passed away.

Hopefully, for his sake, the NBA Hall of Famer will take a look at the bigger picture and make some more positive choices to stick with his recovery this time around. It may take a major overhaul, though, as he recently launched his own brand of vodka.