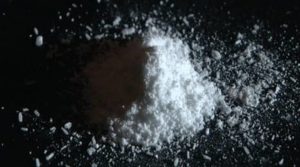 Several years ago emergency responders and law enforcement started noticing people were exhibiting signs of a drug that the experts had never seen before. These patients were not testing positive for heroin, cocaine, methamphetamine, or alcohol. Investigators soon realized that they were witnessing the effects of bath salts.

Bath salts are a synthetic drug that produces a high similar to cocaine or methamphetamine, with some auditory and visual hallucinations as well. The drug does not show up on a drug test and is made combining different chemicals. Manufacturers of the drug would continuously alter the recipe so drug tests could not be developed to test for the bath salts. This also made selling them in places like gas stations and head shops ok, because the ingredients were constantly modified to be legally acceptable.

Investigators began to realize they needed to find the source of the bath salts. They were called to a lady’s house because of reports of her screaming and shooting her gun into the sky. Upon arrival, it was very clear that she was under the influence of something. Police came across a bag with a white powder and a name of a company.

The company was called, China Enriching Chemistry, it was owned by Eric Chang. The company was producing a drug called mephedrone, which was the main component in some types of synthetic drugs. Based out of China, Chang was supplying drugs all over the United States and Europe. He was taking individual orders and sending the drug right to the person’s home. He even went so far as to commit to re-sending the package in the event it got intercepted by authorities.

Chang’s factory was responsible for feeding the addictions of thousands of people in the United States and across Europe. There are also reports that he began producing ecstasy for clients as well. While the United States does not have the ability to extradite Chang for manufacturing and selling illegal drugs, they did alert authorities in China.

Chang is currently serving time in a Chinese prison. His factory has stopped producing illegal drugs. Investigators have noticed a decline in the amount of bath salts cases and attribute this to Chang’s incarceration.