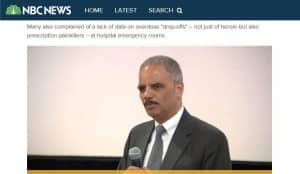 Police officials say that efforts to combat the growing drug abuse crisis are hindered by the lack of recent data on drug deaths, especially heroin overdoses. During a national summit on drug abuse last week, nearly every police official who spoke complained about this problem, with several blaming patient privacy laws.

One law enforcement official said his department has to subpoena overdose data from the local medical examiner. Many also reported a lack of data on prescription medication overdose deaths in addition to the lack of heroin overdose data.

According to the Centers for Disease Control, overdoses from abuse of opiates, notably heroin and prescription painkillers, have been rising since 1992. From 1999 to 2010 alone, the number of drug overdose deaths jumped 102%.

Many officials suggested the use of a computer system similar to Compstat, which gives police near-real-time data on other crimes. Some departments have already taken steps to obtain opioid-related data on their own. For example, police in Washington, D.C., have begun mapping locations where naloxone – an anti-overdose drug – is used by firefighters and emergency medical technicians to locate high drug-use areas are in the city.

The meeting was called in D.C. to identify heroin and prescription drug abuse as a national problem, not just something to be dealt with on the state level. Among the attendees were U.S. Attorney General Eric Holder, FBI Director James Comey, Drug Enforcement Administration chief Michele Leonhart and Michael Botticelli, acting director of the White House’s Office of National Drug Control Policy.

“There has to be a law enforcement response to this but we also need to think of this as a public problem,” said Holder. The devastation caused by opioid abuse is sprawling beyond urban areas, affecting different types of communities across the nation at alarming rates. Many are hopeful that the summit will lay the foundation for an appropriate and effective response to the epidemic on a national level.