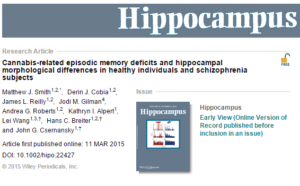 In another effort to understand how marijuana affects the developing brain, a study conducted in Chicago explored the drug’s impact on memory. The results were not favorable for teenagers and young adults who used the drug.

One possibly surprising aspect of the study was that many of the youth who were tested had quit using marijuana, yet still exhibited problems with after their last use of the drug. The study was conducted by researchers at Northwestern University Feinberg School of Medicine and published in the journal Hippocampus. What was found will hopefully go a long way in educating adults and children more about the dangers of marijuana abuse on the brain.

The hippocampus is a section of the brain that is responsible for allowing a person to remember daily things. For instance, a conversation that a person may be having can be recalled by using the hippocampus later on in the day. This region of the brain is also essential for remembering things that were discussed at school or on the job. Researchers noticed that the hippocampus seems to be directly affected by marijuana usage.

During an interview, Matthew Smith, PhD. pointed out an image of a hippocampus. He indicated that this particular image showed red colors, which meant that the region was inflamed. He also pointed out blue and purple clouds of color on the hippocampus which indicated that the hippocampus was shrinking. This was an image taken of teenagers that stopped abusing marijuana two years prior to the MRI scan of their brain.

“So what the findings suggest is there may be a sustained effect of marijuana on the brain. I think one of the main implications; if you introduce a drug into the brains of adolescents the adolescent brain is maturing and doing a lot of things to prepare for adulthood. That can alter the development of the adolescent brain,” explained Smith.

This is one of the first studies that examined the physical effects of marijuana after two years of abstinence. There is a misconception by some people in society that marijuana is relatively harmless, however, studies like the one performed at Northwestern Medicine, illustrate just some of the crippling side effects of heavy marijuana use.