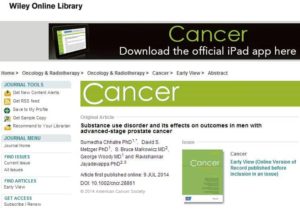 Researchers wrote that it was safe to assume that men with drug and alcohol problems along with advanced prostate cancer pose a problem in that their treatments are not as effective and efficient. These men have an additional medical condition that prevents treatments from being as powerful as it is with men who are not ingesting drugs and alcohol. Researchers are recommending that more screening is done in men with advanced prostate cancer so as to identify those with a drug or alcohol problem.