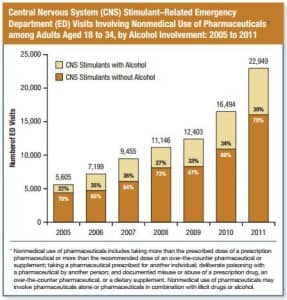 According to the CDC, over 10 percent of children between the ages of 4 and 17 have been given the label as having Attention Dificit Hyperactivity Disorder (ADHD), and almost 70 percent of them are given medication. The prescription stimulants given to these kids can have a large array of side effects, including addiction.

A recent survey of more than 800 doctors who specialize in ADHD turned up some interesting results. For starters, nearly three quarters of the doctors said they received no training on the prevention of prescription drug diversion in medical school, and over half said they didn’t in their residency or fellowhip programs either.

At the same time, these doctors did feel that they saw patients who were trying to obtain prescriptions for stimulants for disingenuous reasons, ranging from wanting a study aid to weight loss and diversion.

The subject of prescription stimulant diversion and abuse continues to come up as the problems associated with the drugs and students seem to escalate. A prime example of this includes the fact that emergency room visits involved stimulants like these quadrupled in just six years, going from more than 5,500 in 2005 to well over 22,000 by 2011.

A recent story in the New York Times quoted Duke University psychologist and professor emeritus Dr. Keith Connors, who said, “The numbers make it look like an epidemic. Well, it’s not. It’s preposterous. This is a concoction to justify the giving out of medication at unprecedented and unjustifiable levels.”

While many people seem to think that giving away medications to people isn’t as bad as selling it to them, laws say otherwise. “In the eyes of the law, there is no difference between someone giving away a pill or selling one; they are both prosecuted as unlawful distribution of a controlled substance,” said Andrew Adesman, MD, senior investigator and chief of developmental behavioral pediatrics at Cohen Children’s Medical Center of New York.

Many prescription drug abuse and recovery experts encourage parents to get second opinions regarding ADHD diagnoses and treatments, as over-prescribing continues to be a problem in America. Of course, if a young person truly does have a medical condition that needs to be address by a medication then it should be, but there also may be other doctors who have different options available. The more people become aware of the powerful side effects and abuse potential of various prescription drugs, the more they can avoid the potential problems associated with them.