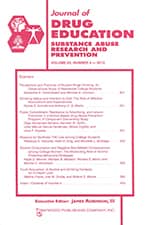 The main reason college students are trying synthetic marijuana is curiosity, according to a new study by researchers at the University of Cincinnati.

More than 330 students in undergraduate and graduate health programs at a public university were surveyed on their use of the drug. The University of Cincinnati researchers found that 17 percent of students surveyed said they used synthetic marijuana at least once in their lifetime, and 3 percent reported recently using the drug.

The students’ leading reasons for trying synthetic marijuana included: curiosity, having the highest response rate of nearly 20 percent; to get high, for the “fun of feeling high”; to fit in; and peer pressure.

Females were more likely to first try synthetic marijuana at a younger age than males. Freshmen and sophomores who had tried the substance did so at about age 16 and a half, while upperclassmen and grad students started using the substance at just under age 19.

The survey’s results suggest preventative measures should target younger children. The researchers suggested that preventative programs should begin as early as high school. “Perhaps, targeting middle and high school students with education programs on the negative effects of THC is needed to prevent initiation and regular use,” they wrote.

Negative effects from using synthetic marijuana products include racing heartbeat, nervousness, paranoia, nausea and headaches, according to the study in the Journal of Drug Education.