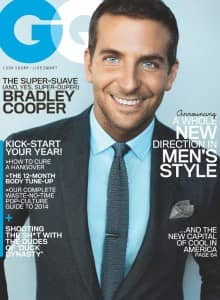 Despite being associate with such substance-fueled films like “The Hangover,” Oscar-nominated actor Bradley Cooper recently opened up in an interview with GQ magazine that he sobered up nearly ten years ago. Since that time, his career and his self-confidence have reached new heights.

Cooper admitted that alcohol and drug abuse were seriously affecting him in a negative way, stating, “if I continued it, I was really going to sabotage my whole life.” He said it was hindering his work by preventing him from being the best he could be.

Later in the interview, Cooper exclaimed, “I’m sober, and I’m like, ‘Oh, I’m actually myself. And I don’t have to put on this air to be somebody else, and this person still wants to work with me?..’ I was rediscovering myself in this workplace, and it was wonderful.”

Bradley Cooper is just one of many popular celebrities to endorse a lifestyle without substance abuse, joined by others who have recently sought help for addiction. Artists can sometimes be tortured souls searching for an outlet and an identity. Too many beloved actors and actresses, as well as other celebrities, have had their lives cut short as a result of their alcohol or drug abuse.

Thankfully people like Bradley Cooper have had the insight and resolve to overcome substance abuse, hopefully inspiring others to do the same. For those who are seeking help for addiction or have a loved one in need, contact Addiction Treatment Services today.

In a recent study published in the Wiley journal Drug Testing and Analysis, researchers examined samples of the popular workout supplement Craze and found it contained a methamphetamine analog. The tests were performed after several athletes had been disqualified from competitions after testing positive for the banned substance, called N,a-diethyl-phenylethylamine (N,a-DEPEA).

According to an article in USA Today, The researchers also found the same chemical compound in another supplement called Detonate.

One of the scientists told the newspaper, “It has never been studied in the human body. Yes, it might make you feel better or have you more pumped up in your workout, but the risks you might be putting your body under of heart attack and stroke are completely unknown.”

Many retailers have stopped selling the supplements recently, though they are still available in some places online. As with other forms of synthetic compounds, these drugs are created in labs with the intention of providing similar reactions as the illegal versions. With so many variations of designer drugs, it can be hard for officials to keep them outlawed and/or regulated.

As an indicator of the blurred lines in the law, Craze’s manufacturer released a statement on their company’s website saying, “Driven Sports is disappointed by the story written in USA Today and allegations about the Craze product. Craze is a legal supplement that provides people with a tool to enhance their workouts, by combining natural extracts to increase their energy. Craze conforms to all U.S. federal regulatory requirements and is proven safe when used as directed. As is the case with any such supplement, the product and its ingredients are subject to regulation by the U.S. Food & Drug Administration. Driven Sports has commissioned extensive testing of Craze from a reputable, independent laboratory), which conclusively establishes that the product does not contain any illegal stimulants.”

Whether legal or not, many thousands of people throughout the country have sought help for use of synthetic designer drugs. These include other offshoots of amphetamines. The consequences can sometimes be just as dangerous.

If you or a loved one is having a problem with substance abuse, contact Addiction Treatment Services today for a free consultation with a counselor to see what treatment options may be available to help.