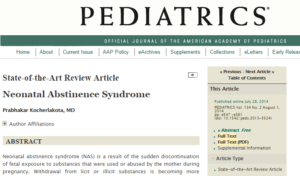 Due to the prescription drug epidemic that the United States is still battling, there has been a significant increase in the number of babies being born addicted to narcotic painkillers. A recent study looked into the problem of infants born addicted to drugs, something called Neonatal Abstinence Syndrome (NAS). The study first delved into the babies addicted to drugs in general, however, researchers noticed that many babies who were born with an addiction had mothers who were not taking illicit drugs. In fact, these mothers were being treated by doctors who were prescribing them narcotic painkillers.

Prescription opioids like oxycodone and hydrocodone are very similar to heroin. They produce the same euphoric effect and they have painful withdrawal symptoms. Painkillers are one of the most abused drugs in the country, and legislators and law enforcement have been working tirelessly to reduce the amount of people that abuse the pills.

Researchers from Vanderbilt University Medical Center studied information from 112,029 women who were pregnant in Tennessee. They found that of all the babies born addicted to drugs, nearly two-thirds of the mothers had filled prescriptions for at least one painkiller during the pregnancy. Other drugs were also present, including prescription antidepressants, nicotine and street drugs. The study appears in the journal Pediatrics.

The study is important because it specifically looks at the prescription painkiller problem and how it is affecting newborns and mothers. It shines a light on the need for more doctor education regarding painkiller abuse and the importance of drug monitoring systems that would allow doctors to see if their patient is exhibiting drug-seeking behaviors.

“Historically, drug withdrawal for newborns has been described among illicit drug use such as heroin or women treated for previous opioid abuse. This is really one of the first studies to look at legal prescriptions for pregnant women. And it draws attention to what is going on in our nation,” explained Stephen Patrick, a neonatologist who specializes in infant drug dependency.

Hopefully, for the sake of our children, doctors will start to pay more attention to what they are prescribing to women who are pregnant, as there are many other damaging effects that can cause harm to the babies than NAS, including a wide range of complications before and after birth.